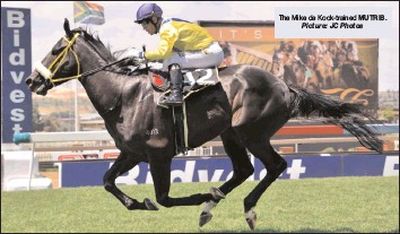 The three-year-old is now a four-time winner from nine career starts, with only one unplaced run to his name so far.

Well there throughout as Greasepaint set the pace from Rock Deejay and stablemate Mujallad, he cruised to the front about 150m out and won by 1.25 lengths from the pacemaker.

Delpech talked Tellytrack viewers through the race with presenter Julie Alexander: “He’s a horse with a lot of ability but didn’t want to do it. I think we’ve found the trick now.

“He was always going to win. I was travelling very, very good. I wanted to follow something but there was nothing around me and it was no good me fighting and pulling him back. I just waited patiently on him and he won full of running. He was looking around a little bit at the end. When I went for my whip he wanted to go to the other side. He’s still got quirks about him but I liked the manner in which he does it. He wants to win now. He puts his ears back and says, let’s go win the race.”

Mike said: “With these young horses the more racing they have and the stronger they get the better they’ll do at sprints. Sometimes it’s very hard to beat the old sprinting hard-knockers but he’s certainly a horse on the up. He’s won a G3 today but I think he’s got a real Group race in him.

Alfolk did well, but more impressive was his debutant stablemate Mutrib in Race 3. Far back after missing the break, he sliced through the field to lead 250m out and beat and improved Left Hook in this 1400m Maiden Plate.

Delpech was impressed. “Even going down he was very, very dumb – and that was our concern, that he was going to get a little bit too far back.

“As the gates opened he half (reared) but he made it up pretty quickly and I was like six, seven lengths off them. I knew I coould run them down because he travelled well with me.

“I was expecting to push him in the race and up the straight but I didn’t want to get there too early because I knew he was going to be looking around a bit – and that’s exactly what he did.

“He’s a lovely big horse who will go further.”

Although many punters will put Mutrib down in their “black books” as one to follow, De Kock cautioned: “They’ve got to take a step up, some do, some don’t.”

He continued: “We’ve still yet to find the one that’s going to go all the way. But it’s nice that a lot of (his youngsters) are winning and they’re going to win some nice races.