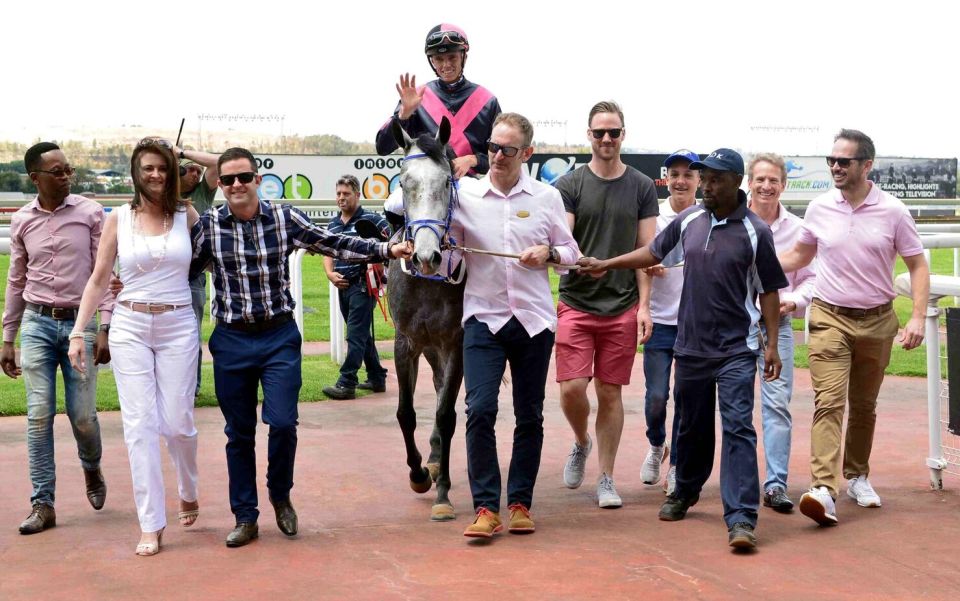 PURPLE Group CEO Charles Savage of Easy Equities fame and his Team Wild Syndicate own three-year-old Wild N Grey, a fluent winner of her second start, racing over 1160m in a Maiden Plate at Turffontein on Saturday.

Wild N Grey led for most of the way under in-form Callan Murray and the syndicate, that includes Savage’s fellow racing fanatic Brad Leather, brought the roof down in Mike de Kock’s Fun Box on the grandstand.

Among the other shareholders is Dorette Turner, also a passionate racing supporter and a regular in Mathew de Kock’s Onamission Syndicates. She actually won her share in a giveaway at one of Onamission’s Open Days.

Charles bred this filly himself from his tiny grey mare Wild Dancer, a filly he says “had a big heart that made up for her lack of ability”.  Wild N Grey, herself a tiny girl, has an awesome stride and can win again.

Wild Dancer stands at Peter and Jenny Blyth’s Clifton Stud and he told: “We wanted a grey so we sent Wild Dancer to The Assayer, who was going to become a jumper but ended up as a stallion at Yellow Star Stud because he is so wonderfully bred.

“The Assayer is a grey by Galileo, a three-parts brother to Frankel that actually stands for free. Where else can one get Frankel lines, so close, for nothing? We’ve sent him more mares.”

Lorraine de Klerk of Yellow Star said: “We’ve obviously sent The Assayer some of our own mares to give him a chance, he’s had several winners from limited opportunities including Charles’ filly, Lumber Jackaroo, Shelby Thomas, Poppycock and Flirty Girty. We have a filly called Swindon that is also expected to well.”

The Assayer is part-owned by trainer Candice Dawson, Tinus Gericke and Vic Via Muto.