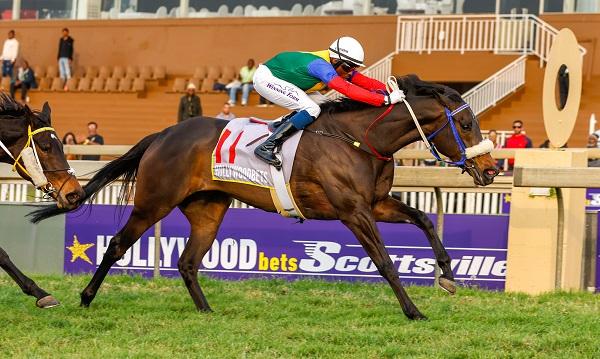 Here are Mike de Kock’s notes on the stable’s five charges competing at Turffontein on Monday, 16 January, brought to you by Betway.

Well-bred Marquez, unplaced on his 1160m debut in a strong Maiden Plate last October, returns to racing in a 1400m contest (Race 3) and Mike said: “We thought he’d run better first up. He was beaten just under 8 lengths but that was still disappointing. We’ve gelded him and I think he will need this run and maybe another to come to hand. He isn’t well drawn either, so it’s best to wait and see how he goes.”

Smart fillies Humdinger and Clafoutis will go to post together in Race 4 over 1400m. “Humdinger ran very well after a short break last time. She’s a in a good space and is course and distance suited, she is capable of winning here though it’s a decent field. Clafoutis has had a few issues we’ve had to sort out and this is probably too sharp for her. We’ve given her a rest, she’s doing well, has a place chance.”

Another pair of stablemates, Golden Spoon and Destiny Of Souls, go to post in Race 5, a Progress Plate over 1400. Mike noted: “Golden Spoon raced in November after a lengthy layoff and she’s had another short break, she’ll need the run. Destiny Of Souls has shown some promise, he must have a small chance here but I think he’s a horse that needs to come down a bit more in the ratings before he can be recommended with confidence.”