A day of sparkling joy! 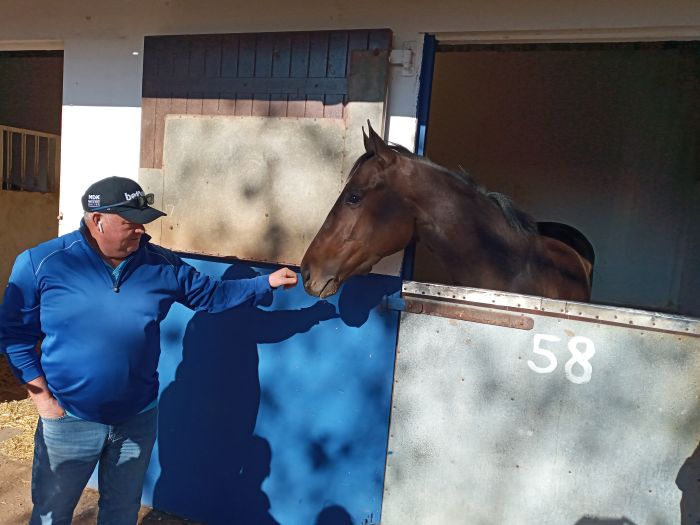 Mike with Aragosta on Friday.

The Durban July, devoid of its traditional magic for the last two years due to Covid-19, is set to trigger a countrywide betting splurge as it returns with bumper pools and an expected sell-out crowd for the 2022 renewal this Saturday.

TAB’s Pick 6 on the meeting and the Quartet on the main race will start with R2-million carryover pools that are likely to surpass the R10-million mark. There are excited punters in Durban who are forming betting syndicates among friends and are hopeful that the Pick 6 Pool can go beyond R15-million, which is not an unrealistic target considering widespread media coverage received in the last few weeks.

Betway ambassador Mike de Kock noted this week: “I think racing’s getting it’s mojo back. It’s been a long time since we’ve seen the excitement prevalent in the build-up and it will reflect in the betting pools. Let’s hold thumbs it will be a good day for all the first-time bettors having a flutter on the day, we need to get them all involved in racing.”

Mike holds a four-strong hand in the Durban July, a race he has won four times since 2002. He hasn’t enjoyed this kind of strength and quality in his July ranks for several years, however. Most experts are expecting Mike and five-time July winner Justin Snaith to dominate the event, though the depth of this year’s contest promises a more open race.

He said: “We are fortunate to have representation from four super horses this year. The overall question is, will this year’s three-year-old’s prove to be better than last year’s crop, who are now four. This year’s classic crop is well handicapped and if they are better than last year’s three-year-old’s, one of them will win it (which includes his own pair, Snaith’s Pomp and Power, Joe Soma’s Red Saxon and Dean Kannemeyer’s runner, Waterberry Lane).

“Safe Passage is a horse with incredible heart rates, his recovery rate following hard exercise is exceptionally good and he’s stepped up every time we’ve asked him to, barring once in the SA Classic when he may have been incubating a virus. His Daily News win came as a surprise as he wasn’t wound up, he’s improved on that, he’s a big runner.

“Sparkling Water is courageous, fit and fresh. She hasn’t won a G1 race yet but has come close on a few occasions, very unlucky last time. She is handicapped to make a bold bid and I hope she will, she is deserving of a win.

“Aragosta is improving. I’d venture to say if he run straight, he can finish in front of Pomp and Power this time. He drifted across the track and lost second place due to that, in the Daily News.

“Al Muthana was truly eye-catching in the G1 Gold Challenge and won well over 1600m. There remains a question mark over his stamina. He is by a speed sire. But he is talented and in a good place, I won’t be surprised if he is among the leading line of horses at the finish.”

His biggest danger: “I think Linebacker has enjoyed a very good prep into the race. He represents the best form from last year and shapes a massive runner,” said Mike.

A last word comes from jockey Muzi Yeni, seeking his first July win on Safe Passage: “Class is class. My horse has 1,5kg more to carry than the other three-year-old’s for his Daily News win, but that doesn’t worry me. He is better now, and I want to win this race!”