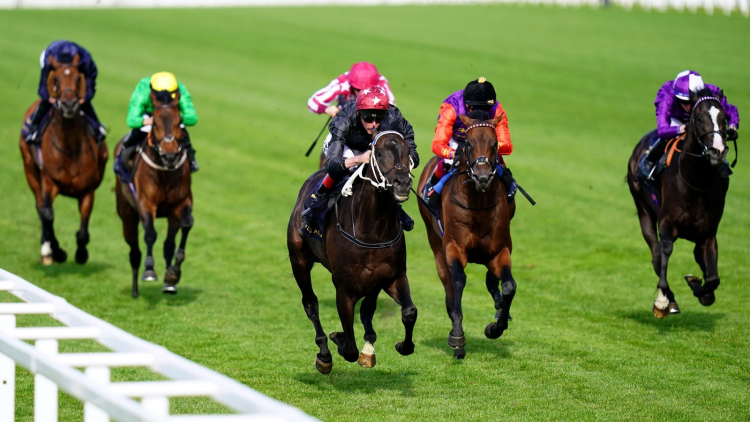 The Gr3 Hampton Court Stakes was supposed to be a coronation for The Queen’s Reach For The Moon but South African owner Mary Slack’s Claymore wasn’t having any of it and proved too strong for the red-hot 2/5 favourite.

Given a perfectly judged front-running ride by Adam Kirby, 7/1 chance Claymore answered his rider’s every call in the straight. Reach For The Moon briefly drew level under Frankie Dettori but Kirby’s mount found plenty to run out a convincing near two-length winner.

Claymore’s success caps a fine week for trainer Jane Chapple-Hyam, who has now sent out two winners and a second at this year’s Royal Meeting.

Chapple-Hyam said: “It was the plan to go out in front. Claymore is in his comfort zone when he is up there bowling along in front. He has got a huge stride. Unfortunately, last time in France he was drawn 16 of 16. He was out in the woods. It was very hard.

“Stepping up to 10 furlongs has helped him as well. It is lovely that Mary Slack [owner] has come over from South Africa for today and he will be able to stand at one of her studs. There is no plan at the moment. Wherever Mary wants to go, I’ll send him.”

Kirby said: “There wasn’t any obvious front runner, so we were quite happy to mosey along and do our own thing in front. He goes well from the front in the mornings. Everything went very smooth and he was in a lovely rhythm.

“He is definitely improving and it was just important that things went right today as last time it was awful, it was like Murder She Wrote! But he has bounced back and fair play to Jane –she has done a champion job of him.”

Slack said: “I am really thrilled and delighted. We thought he would run well in the French Guineas but he was hopeless from a terrible draw. This was the return. I hardly watched really. I couldn’t be more excited and thanks to Jane who has been brilliant. She has had a great week. I’ve mainly had horses in South Africa, but I’ve been in racing for a long time. I have never been to these heights before.”

John Gosden said of Reach For The Moon: “The mother [Golden Stream] was very, very fast; perhaps we’ve run him beyond his trip. I’m not sure he quite stayed it out, but we’ll see – it could well be a possibility. He’s never run over that trip before. He ran a great race first time back in the Heron Stakes and My Prospero franked the form in the St James’s Palace, so we may well be dealing with a horse who only stays a mile – a stiff mile – I don’t know.”

Mike de Kock congratulated Slack, a long-time major patron of his stable, saying: “I can’t think of anyone who deserves this more!”