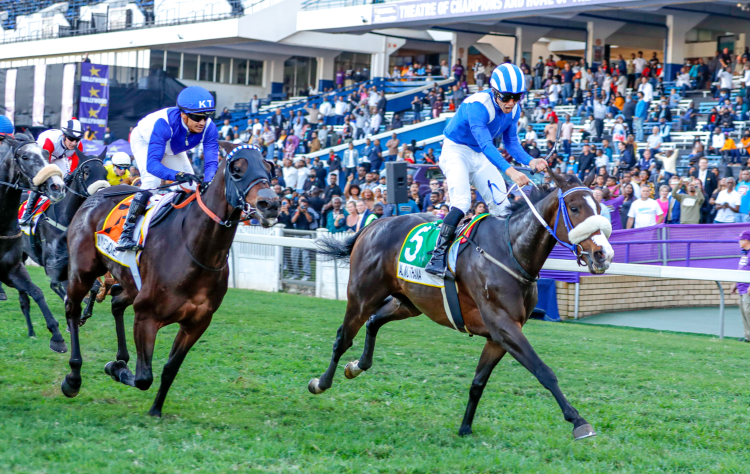 Mike de Kock had expressed positive thoughts about Al Muthana prior to Saturday’s G1 Gold Challenge over 1600m at Greyvile and he was proven right saying that he expected the four-year-old gelding to “trouble the more fancied runners”.

Al Muthana got sick a few days after his somewhat disappointing five-length beating by MK’s Pride in April’s G1 Horse Chestnut Stakes, but following a short rest and full recovery he was considered back to his best in recent weeks. He’s relished the KZN climate and has improved too, because this authoritative win over Daily News winner Linebacker and dual Queen’s Plate hero Jet Dark was his best career win by some way.

Across the track with Al Muthana on the right. (Candiese Lenferna).

“His illness after the Horse Chestnut probably explained his below-par run and he’s really come well recently. He’ll be a July contender now with my others (Safe Passage, Sparkling Water, Aragosta) and I’m hoping we can find a jockey,” said Mike about Al Muthana, who was at Number 21 and just one outside of the most recent Durban July log, but will now gain automatic entry at the cost of another who’ll have to drop out of a final field which will again be fiercely debated and is set for its annual controversy in the next few weeks.

Al Muthana was widest of all when the powerful Gold Challenge field swung for home – that’s where he stayed and won.

Jockey Richard Fourie, who rode his seventh G1 winner for the season and is dead set on at least one more to better Jeff Lloyd’s record, said he felt a lot of horse under him going up the hill before the bend. He’d taken the wide route and kept Al Muthana out of  the trouble a few others contesting the scrum ran into.

“He won full of running,:” said Richard, who got the ride earlier week after he was impressed with Al Muthana’s prep gallop. “I begged for the ride,” he said, but the incredibly talented jockey of course didn’t have to beg too hard, because SManga Khumalo had jumped shipped to Jet Dark so Al Muthana needed a jock. And what a jock he found!

A 4yo Shadwell home-bred half-brother to Gr2 winner Wawail, Al Muthana was foaled and raised at Yarraman Park and is by smart sprinter Deep Field (Northern Meteor) from the Gr2 winning Redoute’s Choice mare, Daana.

Al Muthana has now shortened in to 25-2 in the Hollywoodbets Durban July ante-post betting.

After the Hawwaam Durban July start debacle in 2020, a potential Shadwell first winner in Africa’s greatest horserace, with the last horse to grace SA tracks in the famous white and blue, is the stuff of media dreams.

Sheikh Hamdan bin Rashid Al Maktoum, the deputy prime minister of the United Arab Emirates and owner of the global Shadwell Stud racing and breeding operation, passed in March 2021 and the operation has been downsized. Al Muthana is the end of an era – could he write a fairytale at the same track on 2 July?