Sparkling Water will be aimed at Durban July

Most punters betting on Champions Day at Turffontein were banking on Shoemaker to start the day on a winning note as an early banker in multiples, and he delivered another polished performance to reward their trust.

Shoemaker was marginally slow off, like he was on debut, but that was never a problem for Richard Fourie. Shoemaker looks to have the ability to put himself into contention without much trouble, and he was all over a small field of rivals as they came to the 300m-mark.

Sean Tarry’s National Star didn’t give in when Shoemaker came to fetch him and gave cheek as they raced to the line, but Shoemaker always had his measure and won a tad easier than than the 0.30-margin suggests. 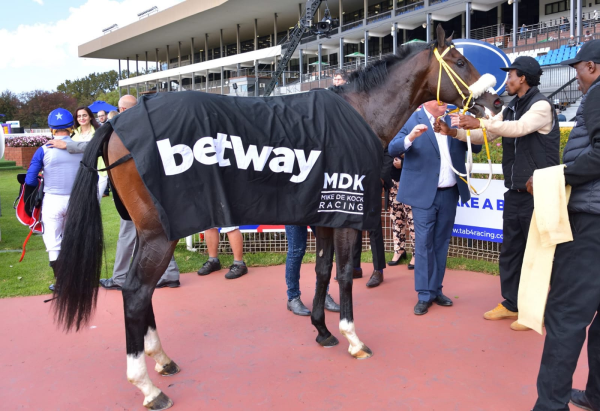 Shoemaker in the winner’s box.

“Shoemaker wanted to get mobile early, I had to leave him alone to let him learn how to race. He has a nice action,  a beautiful animal and we treated this as a gallop,” said a complimentary Fourie.

Mike de Kock said: “He’s a lovely, laid-back horse, straight forward and does a lot right. I told Arun (Chadha, owner), to have a good look at him as he’s going into the fridge now, on ice for a while. He’ll take a break, he’s going to be a nice three-year-old.”

Shoemaker is a two-year-old colt by Gimmethegreenlight from Moggytwoshoes, owned by Chadha’s ASSM Syndicate.