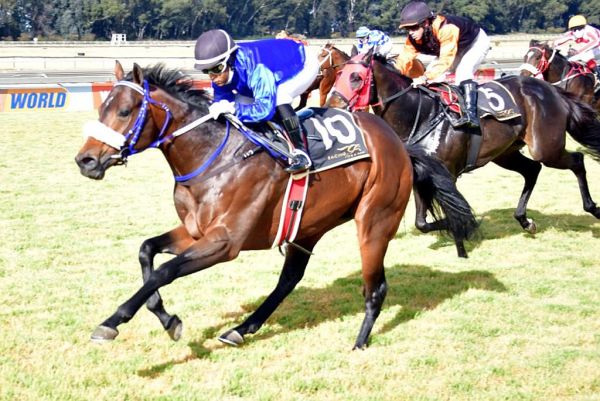 There are no horses to ‘label’ from Betway Ambassador Mike de Kock’s stable this Saturday, but he will send out a few with chances at the Turffontein meeting and all are worthy of inclusion in exotic bets.

Barak and Masaaken have money chances in Race 3 over 2850m, a field of only seven runners which almost guarantees they’ll have a say in the finish as their match fitness is spot-on following recent runs.

Mike said: “Barak takes a drop in class and a hike in distance and both play into his favour. He is a consistent horse, he normally tries his best and I reckon he will enjoy this trip. He has winning prospects. Masaaken also has some heart, though she is one-paced and needs some luck in the running. She’s up in class, we’re fitting her with blinkers, we’ll be happy with a place for her.”

Next up is Jaipur Jewel, who runs in Race 4 over 2000m, with one good previous run over this distance on record. Mike commented: “He has an eachway chance. He looked to have his 1800m race won last time but got run out of it. Richard Fourie suggested we try blinkers and we’re doing that, Richard is back on board. He knows the horse well now, they should be competitive.”

Bold Act will take her place in the G3 Sycamore Sprint, reverting to 1160m. “Bold Act is in a strong field, she’s a talented filly but there are a few good ones to beat. I’d include her, in an open race, I like the fact that she’s drawn towards the outside,” said Mike.

Power Ranger returns from a layoff, he has been entered for Race 8 over 1100m and Mike described him as an ‘under-achiever’. He said: “I’ve expected more from him. He has been gelded, this is slightly sharp for him but he is one to follow in the future. Put him in your quartets.”

The last runner for the day is Sequoia, a colt Mike says is coming off a win in Durban but was a bit sick after that run, so he will return fresh, is doing fine and warrants consideration in Race 9 over 1600m.