Off to Australia (Gramps!) 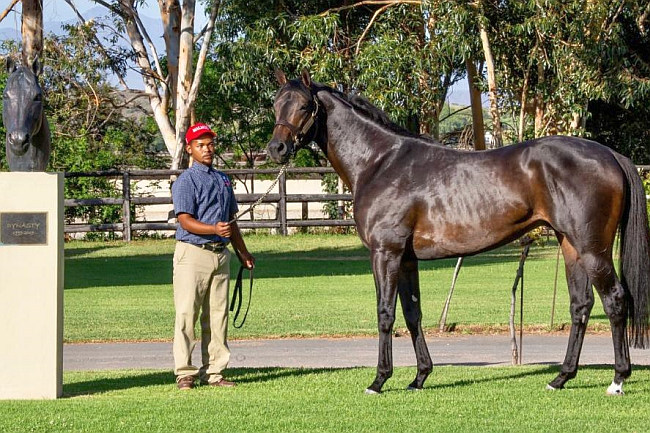 The magnificent and fertile lime-rich Robertson Valley rolled out the proverbial red carpet and welcomed another big name equine resident at the weekend.

South African Triple Crown champion Malmoos follows in the hoof prints of some of South Africa’s greatest sires as he takes up residence at Ridgemont Highlands.

The exciting news broke just over a week ago for the breeding community that the former dual champion Mike de Kock charge – only the fourth horse in history to win the South African Triple Crown – would be joining the illustrious Ridgemont Highlands stallion roster in preparation for the new season.

Craig Carey, from Ridgemont Highlands, oversaw the Malmoos ‘welcoming committee’ and had only one word for the media as the handsome athlete backed off his float. 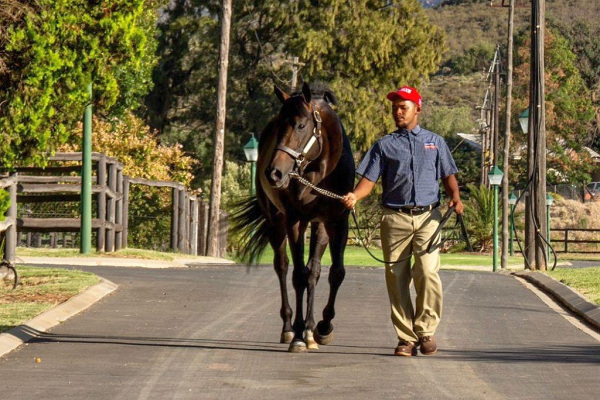 Malmoos takes in his new surroundings.

Craig Carey had a twinkle in his eye as he described his first impressions of a ‘true professional’ in his modern new surroundings of the stallion section at Ridgemont Highlands.

“This can be a testing process as a champion colt makes the transition from the racing yard to the next phase of his career in the stallion barn. But the extraordinarily handsome Malmoos has been the consummate gentleman and his relaxed demeanour and regal presence has already created an aura around the Farm. He has settled in extremely well. His manger was empty this morning and he enjoyed his walk as he enthusiastically took in all the new sights,” added Carey, who said that he expected demand to be at a premium for a champion racehorse that had everything going for him to make it as a sire.

“He was purchased for over R4 million as a yearling by some of the best judges in the game. His catalogue page and athleticism already placed his name in lights at that early stage. He then showed his versatile mix of speed and stamina when he won from 1200m to 2450m. It is already well documented that he lifted the South African Triple Crown in 2021 – winning the final leg in shades similar to that of the great Horse Chestnut. He is the last Grade 1 winning son of the great Captain Al, and he has to be one of the most exciting locally bred prospects to stand in South Africa for many a long year. We are privileged to be a part of the exciting Malmoos journey, and our belief in him is so great that it was decided for him to take up residence in the stable left by the inspirational Dynasty.” enthused Carey.

When contacted for a comment, trainer Mike de Kock was pleased to hear that his former star had arrived safely in Robertson and was already settled in.

“He is such a special animal! I am on record, and I will stick to my guns, that Malmoos is the real deal. It doesn’t take a trained eye to observe that he has that athletic superstar presence about him – that rare x-factor. From the moment he walked into our stable as a youngster he commanded that status. His Dad was a champion and his pedigree speaks for itself. He is a young stallion that has it all – the sensational Grade 1 performance on the racetrack, one of the best pedigrees in the history of South African breeding, and the looks of a superstar. To find a horse with all of those qualities is not common – it’s special! One thing we can be very thankful for is that courtesy of the magnanimity and support of Sheikha Hissa Hamdan Al Maktoum and the Shadwell team, we are enjoying the privilege of standing him on African soil!”  – Sporting Post.