Two fillies back to best 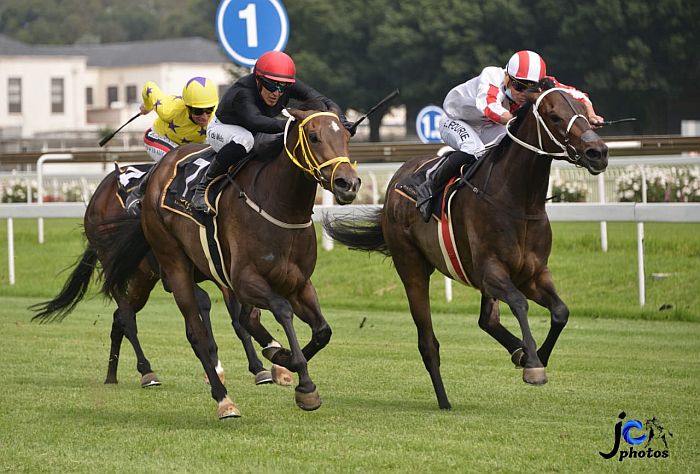 Aragosta (far side) ran on to win. (JC Photos).

Mike de Kock’s concern that the inside track at Turffontein would be too sharp for Aragosta in G3 class materialised when the gelding was outpaced in the early stages of the Sea Cottage Stakes and had to come from last turning for home. But Aragosta’s class prevailed and he reeled in stablemate Clafoutis in a thrilling finish to win the race by a quarter of a length.

Visiting Cape jock Richard Fourie produced a peach of a ride to deliver the favourite at the right moment, and Clafoutis, who looked beautiful cantering down, was game in defeat for the stable Exacta.

Fourie said: “Aragosta was lethargic early, but the pace was on so I tracked Gavin Lerena (on the fancied) Platinum Sky. We had Platinum Sky in control at the 400 but when I looked accross at the 250m-mark I saw Clafoutis running strongly and I had to keep asking. He is a big horse with a big heart, he definitely needs more ground, this was a good win.”

Mike echoed that and indicated that Aragosta’s main aim for the season will be the SA Derby, with Clafoutis an Oaks contender during the feature season.

A R220 000 National Yearling Sale graduate, Aragosta made it 3 wins with 1 place from his 5 starts for stakes of R286 385. He races in Mike’s white-and-red-silks in a partnership including Murray Makepeace, JJ van der Linden and Noeline Malherbe,