We wish him a happy 30th birthday! 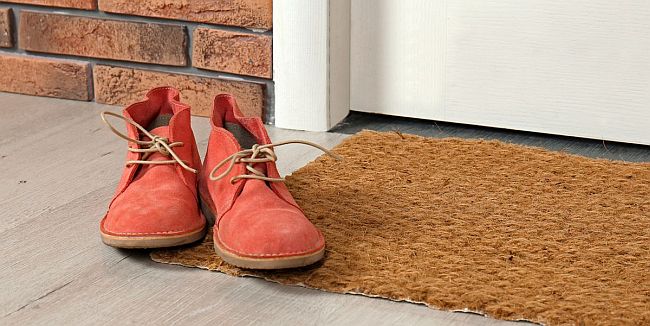 Last Sunday’s Wilgerbosdrift Stud Stallion Day will be remembered for its excellent show of sires and world-class hospitality (read here), but there were several other notable matters to report on. Mike de Kock felt that the day deserved a ‘Man Of The Match’ award. In presenting this award he has to reveal what happened behind the scenes – with consideration, of course, to what falls within the parameters of a family website.

There were probably around 70 select guests at the Piketberg district farm, Mike told, with reportedly good apologies from the few who failed to make it – a breeder from the Paarl area was in the process of ‘catching foals’ and one bloodstock agent had hurt his back and was stuck literally between the rocks of Sea Point and a hard place.

The diminutive, in-form jockey Muzi Yeni was also invited and apparently turned up, but during the course of festivities was allegedly swallowed whole by a large, grizzly man who resembled media veteran, Charl Pretorius, and who’d thought that Yeni was the occasion’s hors d’oeuvre.

Next, Mike said, came an attraction that might have stolen the limelight from the stallions and will probably not be allowed at events of this nature, staged in future. It was a pair of shocking pink velskoens (‘vellies’) worn by Klawervlei’s recently suave and trendy boss, John Koster.

It won’t be surprising if the new-look Koster is also trending on Twitter, someone should have a look. ‘Johnny K’ looked like an icon for the modern age. It was like he’d stepped straight from the set of ‘Love Island’. He’s in the shape of a man half his age, wore an outfit to match his shoes and smelt of Aramis and Crème de la Mer. Debates ensued around John’s physical activities, he truly now is Captain Of All.

Millstream’s Jan Mantel, a man of Afrikaans heritage who claims to have become so anglicised on the plains of pompous Robertson that he’s forgotten his mother tongue all together, slipped on this revelation. As the shadows of a bright afternoon grew longer and the dark ruby red substance produced by Rupert and Rothschild found Jan’s deeper veins, he broke out in a mixture of Flemish and some Swahili whilst explaining his own theory on Koster’s weight loss.

Marsh Shirtliff was right up there with the pace for a while before yielding to the urgings of his lovely companion, Karen Norman. Safety first, also, for younger breeders James Armitage and Eugene Freeman who, like Karen, saw a thing coming. Ridgemiont/Highlands peacock, Craig Kieswetter, not intent on having his feathers ruffled, slipped away early to a Porta-Loo around the back of the marquee tent and never came back. Johan Loftus, however, stayed in the contest. He quietly operated from behind a deep, round glass, didn’t give much away except for a slight buckle of the knees around 6pm when he, too, called it a day. 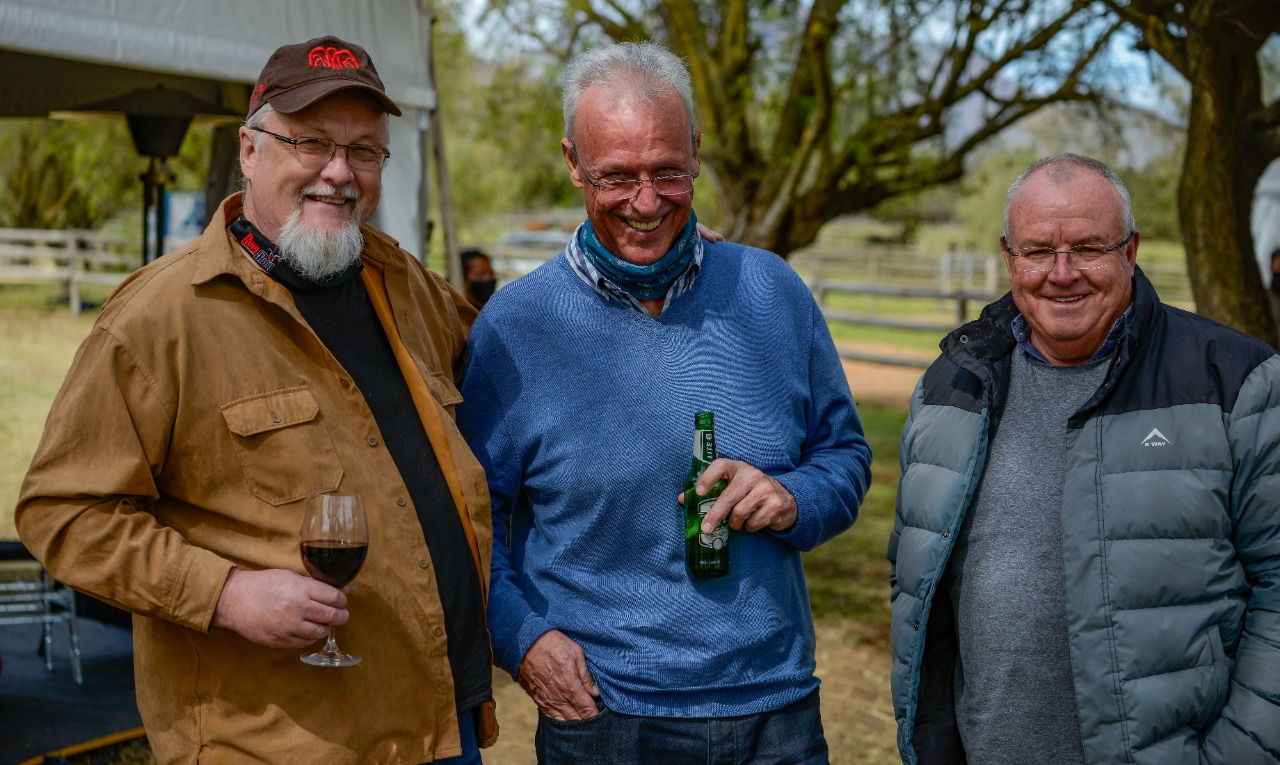 Not to be outdone in the weight-loss department was Form Bloodstock’s Jehan Malherbe, who explained that taking long walks through the leafy suburbs of Newlands and his resident Bishopscourt is not only good for weight loss, but hugely therapeutic. Malherbe revealed that, during a typically long, brisk walk, he was able to find solutions to most of the world’s problems and come up with some good business ideas.

Malherbe tried to discuss one such idea with part-time breeder, ‘Boeta’ Engelbrecht, who runs South Africa’s biggest potato empire. Boeta is a pleasant, round-faced man who actually resembles a medium-sized spud after a few shots of brannewyn, but he rejected Malherbe’s idea of starting boutique fish-and-chips stores along the route from Fish Hoek through Muizenberg and Kalk Bay and on the other side of False Bay at Macassar and Die Strand.

Jehan fired away: “Boeta, let me tell you, you have to own the supply chain. You grow the potatoes, truck them, bag them and sell them. And with the chips. We’ll cut them to size and supply to Pick n Pay and Spar and then we sell the extras in our shops!”

Boeta replied: “Jehan, that’s a good idea, but we already own the supply chains. And we already supply bagged chips to Pick N Pay and Spar!” 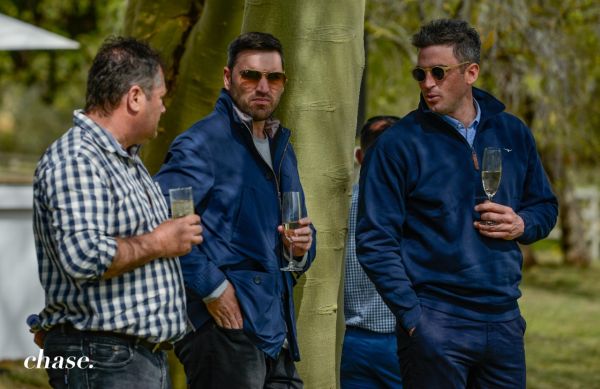 Tree-huggers. John Everett (was he there?), Justin Vermaak and Craig Kieswetter.

Malherbe, slightly taken aback, turned his attention to the DJ, who was playing good music throughout the day. He started complaining about U2’s ‘The Streets Have No Name’ being “too old” and Neil Diamond’s ‘Crackling Rosie’ being “too recent”. This was a contradiction in terms of music and puts Jehan’s age somewhere between 48 and 93.

Putting in a strong claim for Man Of The Match, Malherbe came into his own at the evening dinner table kindly prepared by Wilgerbosdrift’s extraordinary talented chef, Salmon Nel, and featuring host, Mary Slack. Malherbe said that he would give his own, home-made Risotto an easy 7-10 (suggesting his concoction would surpass anything served by Nel), and then told how his active walking regime had revived an interest in all sports. He’d been glued to the Paralympics a week before, and was now scanning the TV guides for replays of last April’s World Curling Championships held in Canada.

Now to a first-time guest at Wilgerbosdfrift who seemed marginally out of place at times due to what looked like onsets of temporary paralysis.

Young Justin Vermaak has been around the major players in the industry for a while – in fact has just landed himself a top position in Germany and Dubai courtesy of Maine Chance Farm’s Andreas Jacobs. But when Mrs Slack pointed to the spot next to her at the table and said, ‘Justin, you sit here’, Vermaak was overcome by awe. He froze for a minute before Mary asked someone to help him get seated.

There were more incidents of ‘freezing’ for the youthful bloodstock agent, who studied the butter-soft beef on his plate for perhaps five minutes before sliding his fork into it. With a little more bravado he later tried to feed berries from his spoon to other dinner guests. He rejected Nel’s delightful cheese cake dessert but, once tasting it, devoured two slices with his bare hands and cleaned the plate off with his fingers in front of Mary and everyone! 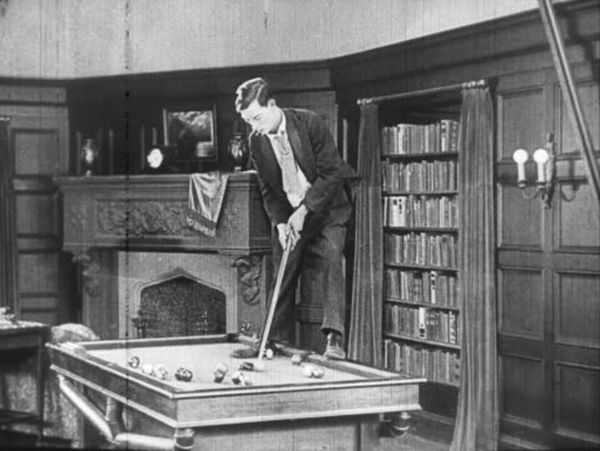 Library pool: Some would be better off putting them than potting them!

A procession of guests moved to Wilgerbosdrift’s huge and cosy library for a night cap and a game of pool, in which Mike and Jehan took on Vermaak and partner Pretorius in a doubles contest. The lowlight of this game was that someone (presumably the bulbuous, wasted scribe) dropped a ‘raspberry tart’ near the Fiction section of the library on the triangle’s end of the pool table. Social distancing had been observed throughout the day, but this would have killed the worst viruses known to man.

The highlights were a few more Vermaak ‘freezing’ incidents. First, he hovered over the white ball and failed to shoot for the best part of three minutes, claiming to see ‘four’ white balls. Later, with the game on a knife’s edge, Vermaak hung over a vital shot like a praying mantis sizing up his prey for what seemed like 10 minutes, a period drawn out heavily by that pungent sound that kept lingering in the atmosphere. Despite warnings and loud pleas to shoot a striped ball, he finally shot at, and sunk, the opposing team’s last solid ball, clearing the way for a two-shot finish crowned by a black-ball pot from Mike.

As the only one who abstained from red wine and stuck to beer, Mike believes that he was the most qualified to pick ‘Man Of The Match’ following all these shenanigans. 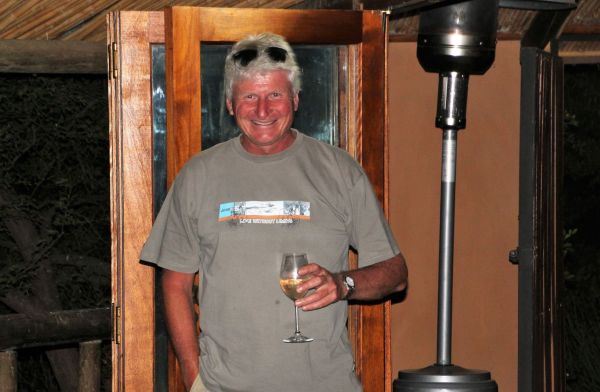 Jan Mantel, Man Of The Match!

Mike announced his 2021 Wilgerbosdrift Stallion Day Man Of The Match to be Jan Mantel, and said: “Jan, as this day progressed, came out of his shell, foaming at the mouth like a pedigreed bull that had been chained up for six months. This can be understood and explained at the hand of the strict covid measures and the fact that members of this fraternity hadn’t seen each other for ages. But Jan was quite amazing. He was like an Inn-Keeper serving drinks to the rowdy in one of those medieval classics, you know, with two wine bags on his side and pouring all round. Every time someone’s glass looked half-empty, he filled it to the brim and poured some for himself. The hired barmen stood in awe.

“Jan just pipped Justin Vermaak for this award, but he is a deserving winner all the same. I’d like to name the event that followed the stallion parade, ‘Becoming Jan’, because in ways it could be worthy of TV rights as a once-off production following a man who truly finds himself and his soul on a late afternoon among snow-capped mountains somewhere in the Piketberg region of the Western Cape.”