Malmoos demonstrated his true quality as he stormed to victory in the Grade 1 World Sports Betting SA Classic over 1800m at Turffontein on Saturday.

Now, he is just a Derby away from an immortalising victory in the WSB SA Triple Crown and Mike de Kock confirmed: “He is bred to stay and we think he will. So he will either stay or he won’t, but he have to go for it!”

Jockey Luke Ferraris was able to settle him in fourth place as Shah Akbar made sure of a decent enough pace. Shah Akbar tried to slip the field in the straight but was quickly reeled in by the more fancied horses. 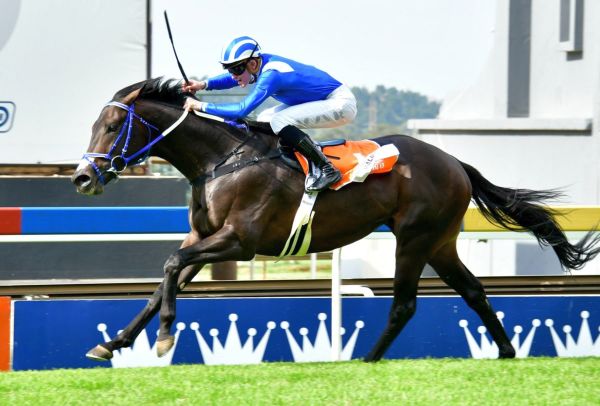 Malmoos has a few gears.

In the final 100m Malmoos drew off to win by two lengths from Second Base, who just held off Catch Twentytwo by a neck. Flying Carpet was 0.50 lengths away in fourth.

“He showed real class today.” said Ferraris. “He is a champion. He has so much gate speed, we got some cover and he had the run of the race. When he unwinds, he gives you gooseflesh. He’ll get the 2400m.”

Mike said that Malmoos had “tightened up” in the last few weeks, and praised his team for hard work. “It’s been hard to replace Mathew (De Kock), but we’ve got a good team around us now and long may it last.”

Mike thanked World Sports Betting for their sponsorship and praised the young jockey for his ride: “He rode a super confident race today. He’s doing a lot right for a young man.”

He quipped: “Luke is the third generation Ferraris I’ve had something to do with, and the first one to actually do me a favour!”